When building questionnaires, many configuration settings can be set directly. Whether it's the question text itself or the range of options for a dropdown input, you can simply set the value you want in the tools:

Instead of entering a value directly, we can instead dynamically link this field to another source of data - for example, a column in the spreadsheet, or an experimental manipulation. In Gorilla, we call this binding - we bind the field to a data source that allows it to be defined elsewhere. You can bind any configuration setting that has the little link icon ( ).

To do this, we can set the second of these two questions to be conditional, and set the condition to be that we've answered 'Yes' to the smoking question. These conditions will update in real time - any time the response changes, the logic will be evaluated and the visibility of the second question will update dynamically:

When you add your questionnaire to an experiment, you can now configure manipulations separately for each instance of the questionnaire:

Each participant has their own unique Store - data that belongs to them and stays with them for the duration of the experiment. You can think of it as a little backpack or suitcase that each participant carries with them, and you can put values in there and then retrieve them again later. In the first generation of tools, this was referred to as Embedded Data - we've changed the name to Store because we think it's a better term, but it fulfils the same function.

The simplest use-case for the Store is when you want to save a participant's response and then use it later in the task. Note that this is separate from recording responses for your actual experimental data that you download once your participants have finished - participant responses are always recorded in your downloaded data; the Store is purely when you also want to be able to use a particular response later in the task. 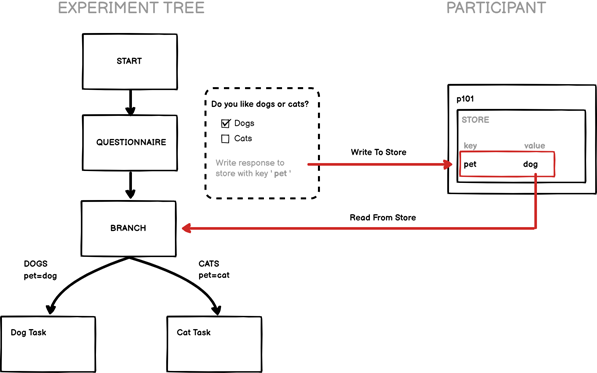 To do this, you simply select the response, enable 'Write To Store', and set the field you want to store it under. In this example, the choice of Dogs or Cats will be saved to a field called pet, which can then be used in the experiment tree or a future task: