This Walkthrough is a step-by-step guide to the different ways of using spreadsheets in Gorilla.

To make the most of this guide, cross reference the descriptions with the Walkthrough: Spreadsheets sample project.

In Gorilla, the spreadsheet drives the task. Consequently, you will always need a spreadsheet even for the simplest task.

The simplest task would contain a single trial configured via a single row in a spreadsheet. In the example below, a text zone called MathsQuestion will display the text '3 + 5 ='.

To make this work, the text zone in the task structure would have the Source set to Spreadsheet. When the source is set to spreadsheet the colour of name will be green. This is a mnemonic aid; the livery for Excel is also green.

By default Gorilla always includes two additional columns: randomise_blocks and randomise_trials. If unused leave these blank. More on these later.

You can also use the spreadsheet to move between displays.

In the linking displays example we first show the instructions, then a single trial (test) and finally a debrief screen.

The displays in the task structure do not have to be in the same order as in the spreadsheet.

Once you have the flow of your task working by linking across displays, it's time to populate a block of trials.

In the Trial Randomisation example we see that the 5 test trials will now be shown in a random order.

Perhaps you want multiple block of trials with a screen for participants to rest between each block.

To do this add a Block display with text populated from the spreadsheet (see column Text) and then put 1s next to the first block and 2s next to the second block. This will shuffle each block separately.

This is shown in the Multiple Blocks example - spreadsheet consecutive. 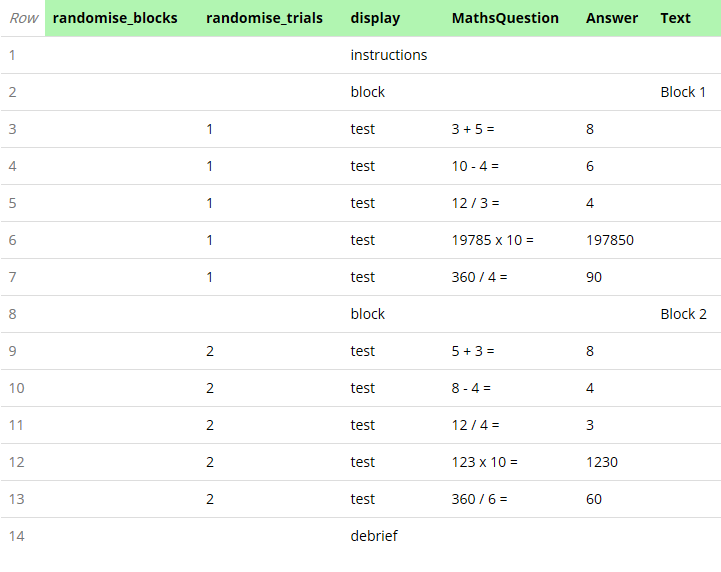 Or perhaps you want to shuffle the trials across blocks. That is possible too. Instead of putting 2s next to the second block, leave these as 1s.

This is shown in the Multiple Blocks example - spreadsheet fixed length. 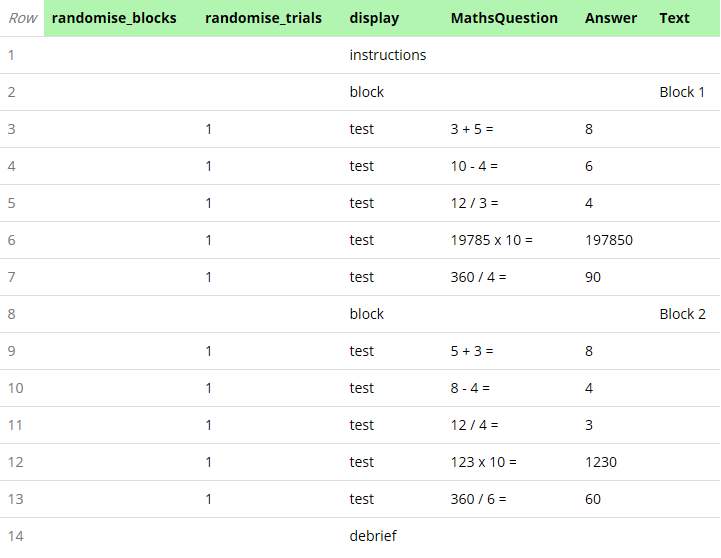 You can view an example of a real experiment that incorporates both of the above techniques (shuffling trials across blocks, and shuffling trials independently within blocks) in this Gorilla Academy case study.

Perhaps you have two (or more) blocks and between participants you want them shown in a different order.

To achieve this, use the 'randomise_blocks' column. Next to the first block put 1s and next to the 2nd block put 2s. When a participant comes to the task, Gorilla will randomly pick which block to show first. 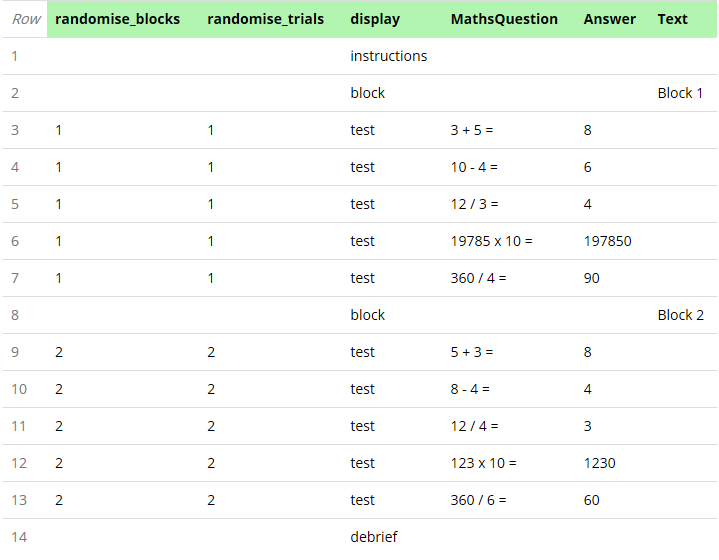 Note that the Block displays do not have a number in the randomise_blocks column, and so will always be shown in the order Block 1 then Block 2. If they had a number in the randomise_blocks column that matched their respective trials (so 1 for the Block 1 display and 2 for the Block 2 display), these would change order too. This can be useful if you have different instructions for each block.

Counterbalanced Order: If you want to counterbalance the block presentation, create two spreadsheets (one for each order) and use a randomiser in the experiment tree.

More than 2 blocks: You can randomise more than two blocks in the spreadsheet. Gorilla will randomly shuffle the order of blocks independently for each participant.

Perhaps you want to show some practice trials first. The Practice Trials example demonstrates this. In the task structure there is a new display called practice which provides participants with feedback. In the spreadsheet, there are now new rows to trigger the display of the practice trials. 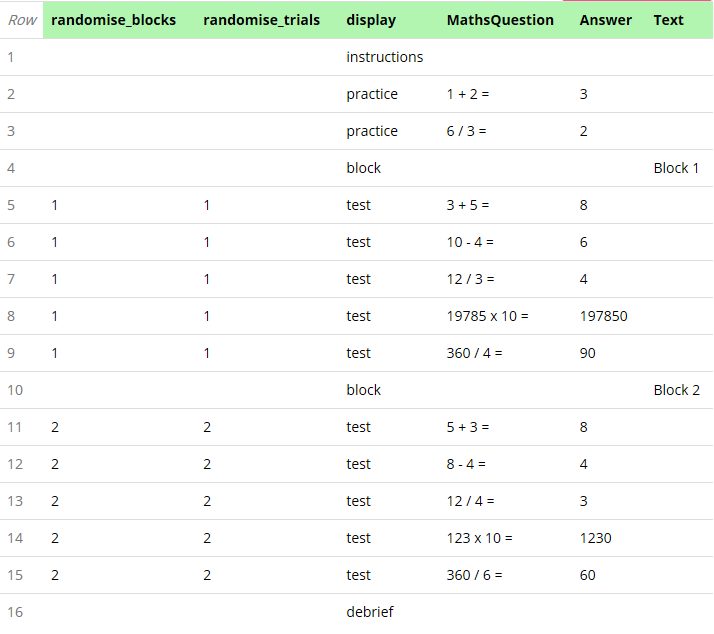 An alternative approach would have been to re-use the test display with the option to turn feedback on or off based on the content of a spreadsheet column.

Gorilla requires content for all the user-defined columns that it is expecting, but you can also include additional metadata.

Metadata columns have 3 primary use cases:

The Metadata example demonstrates case 1. Notice the different values under the column heading 'metadata'. Here the metadata shows the type of question being asked. Once data has been collected, trials and responses can be grouped using this metadata. This greatly simplifies the analysis process using Excel pivot tables or other data analysis software.

Read more about analysing your Gorilla Task Data in our How To: Metrics Guide. You can also view an example of using metadata columns in the context of a real experiment in this Gorilla Academy case study.

There is no limit to how many columns of metadata can be added. The only restriction is that they must all have different column names. 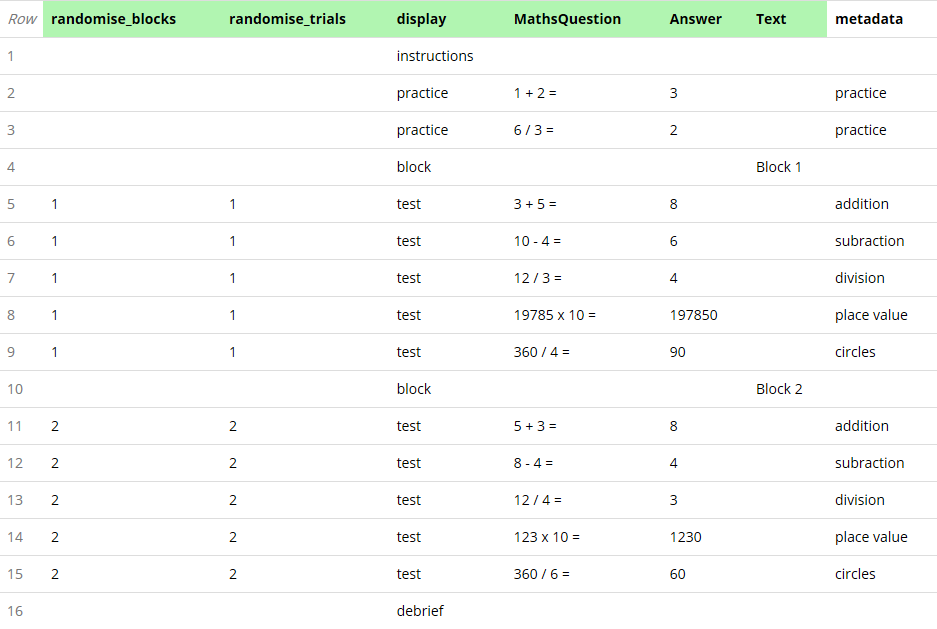 In the image above, notice the white colour for the heading of the Metadata column. This helps to clearly distinguish between metadata columns (white) and the columns linked your task structure (green).

Metadata columns (white) will typically be collectively positioned to the right of the linked spreadsheet columns as shown above.

When you upload a new spreadsheet, be sure to check your column heading colours. Only columns which are coloured green are being used to run your task. White-headed columns are metadata. Use this as a quick way to check your Task Zones are linked correctly with your Task Spreadsheet columns.

There are times when you may require completely empty Metadata columns. This is typically only applicable in case 3 - for instance, when using script to create your own scoring system.

Remember to check your Task's Spreadsheet Tab to view all the known columns for your Task. If you can't see a required column, reupload your full spreadsheet. Please read our Troubleshooting Guide for more detailed information on this.

Trials can also be interleaved. The Interleaving example demonstrates this.

Advanced Technique: In the example above, we use the same display for both trials types. This is not mandatory; different displays could also be interleaved.

Within a block, you can present a mixture of trial types. The Block Interleaving example demonstrates this.

Advance Technique: In the example above we use the same display for both trials types. This is not mandatory; different displays could also be included in the same block.

If you want to constrain how your trials are randomised, you can use pseudo-randomisation. For example, imagine you have two different trial types, type A and type B. You may want to randomise trial order while ensuring that the participant sees no more than 2 consecutive trials of the same type.

You can set up this kind of pseudo-randomisation in the Spreadsheet by creating pairs of trials consisting of one trial of each type. We give each pair of trials a different number in the randomise_trials column. The order of each pair is then randomised independently. This ensures that the participant will never see more than 2 trials of the same type consecutively.

You can view an example of implementing pseudo-randomisation in the context of a real experiment in this Gorilla Academy case study.